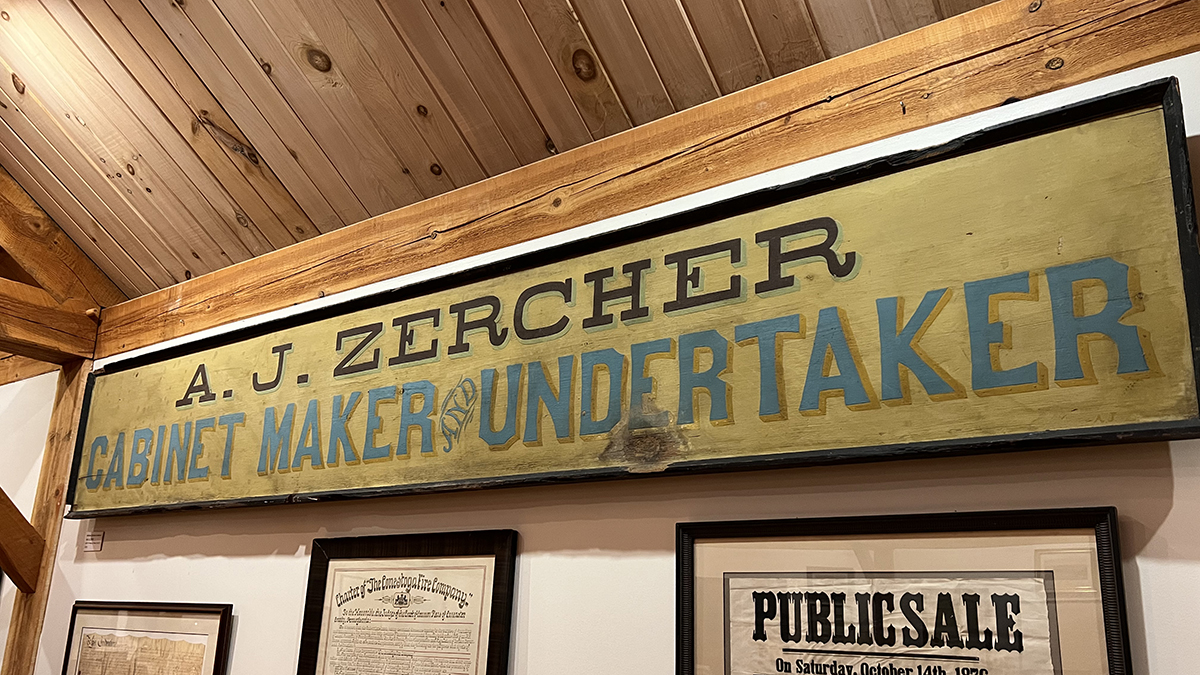 Andrew J. Zercher was an undertaker and merchant of Conestoga (then known as Conestoga Center) He was born on February 15, 1857, son of John J. and Maria M. (Mess) Zercher.

Andrew and Elizabeth (Johnson) Zercher, his paternal grandparents, were of German and English ancestry, respectively. Andrew Zercher died when he was 79 years old, his widow passing away in January 1901, when he was almost ninety-two years of age. He was a mechanic and, in early life, followed the trade of plow-making and wagon-making, later farming. He was a member of the Dunkard Church and a public-spirited man. It was with these worthy people our subject spent his boyhood, and by them he was taught the principles of honesty and uprightness which he has so nobly upheld in his daily life.

John J. Zercher died in 1865, at the early age of thirty years, from typhoid fever, contracted on the battlefield of Gettysburg, which he visited after the battle for purposes of investigation. He had been a teacher in the public schools and was one of the foremost educators in Lancaster County at the time of his death. He commenced in the public schools and Mt. Joy Academy, where he took a full course, and he also had the advantages of a supplemental course at the State Normal School, Millersville.

He was a great reader and deep thinker, and his constant aid was toward the betterment of public school facilities. He was a member of the Dunkard Church and was extremely temperate in his mode of life. His wife survived them, afterward marrying Andrew Eidemiller, of Providence township. A family of six children was born to Mr. and Mrs. Zercher: Emanuel H., a resident of Conestoga township and justice of the peace; Phoebe, who died when two years of age; Andrew J., the subject of this sketch; Elizabeth, wife of H. N. Eberly, of Providence township; Elmira, wife of A. J. Winter, of Lancaster; and Abraham, a tinsmith, who died at twenty-five years of age, unmarried.

Andrew J. Zercher was a boy of only seven years at the time of his father’s death and was placed with his paternal grandparents, who lived on a farm north of Conestoga, where he worked most of the time until he was sixteen. His education was limited and was obtained principally during the winter months. At this time, he began working by the month for pay, and after two years at farm labor, he was apprenticed to George D. Proven, of Millersville, to learn the cabinet trade.

After serving three years he returned to Conestoga and established himself in business, and has since conducted a cabinet and undertaking establishment. In 1898 Mr. Zercher engaged in the mercantile trade, running it in connection with his already established business. In 1898 he was appointed postmaster of Conestoga Center, and in 1901 he disposed of the mercantile part of his establishment and has since devoted himself to undertaking and looking after his farm property.

Mr. Zercher has always been regarded as a public-spirited, progressive man, ever ready to participate in any affair calculated to enhance the interests of the community in which he resides. He is a leading Republican and has been elected to office as that party’s candidate. He has represented his district in State conventions three times and has twice been an assessor and once inspector of his district. In 1901 he completed and now occupies the finest home in his village.

On November 1, 1880, Mr. Zercher married Miss Martha A. Bruner, daughter of P. M. and Elizabeth (Ohmet) Bruner, of Conestoga Center. They have two children, Blanche P., at home, and Charles M., a student at the Millersville Normal School. Mr. Zercher is a member of Kishacaquilla Tribe, No. 65, I. O. R. M., in which he has passed all the chairs; Conestoga Lodge, No. 334, I. O. O. F.; Knights of the Mystic Chain, of which he is commander; and of Charles M. Howell Lodge, 496, A. Y. M. of Millersville, Pa. He is a member of the Lancaster County Funeral Directors’ Association. He and his family unite with the Reformed Church, Mr. Zercher being an elder and Sunday-school superintendent and taking a great interest in church work. He commands the community’s esteem in which he has his home and has a wide circle of personal friends.